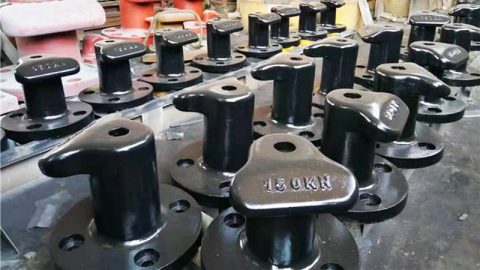 The shape of Eversafe bollards has been refined with finite element techniques to optimize the geometry and anchor layout. Even at full working load, Eversafe bollards remain highly stable and provide a safe and secure mooring. 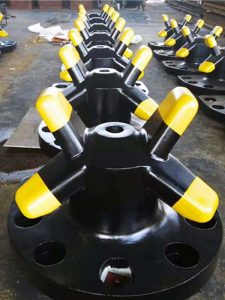 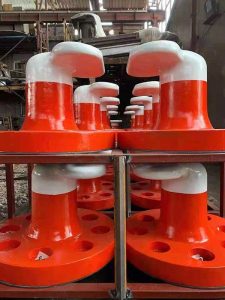 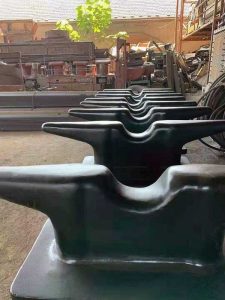 Pillar Bollard (MUSHROOM head): General purpose applications up to 200 tons, suitable for warping operations, 360 degree horizontal line angle use ,can be utilized from all sides of jetty

Eversafe Mooring bollards are offered in Spheroidal graphite cast Iron (Sg Iron), referred to as Ductile cast Iron, because of its superior strength and resistance to corrosion. Ductile cast iron combines the best attributes of grey cast iron and cast steel without the disadvantages.
Grey cast iron is cheaper per unit weight, but the need for thicker wall sections and poor impact strength outweighs this.
Cast steel remains popular due to its high strength and good impact resistance but needs regular painting to prevent corrosion.

To be simple: to achieve same SWL capacity and safety factor, if go with grey cast iron, the bollard will have to be big and heavy; ductile cast iron bollard with get medium size and weight; cast steel bollard will get the small size and ligh weight relatively.

Eversafe Bollards are supplied as factory standard with a protective coating suitable for most projects.

How to select bollards

Mooring bollards should be selected and arranged according to local regulations or recognized design standards.
The selection should consider: mooring patterns, draft changes due to loading and discharge, wind and current forces , swell, wave and tidal forces, mooring line types, sizes and angles and ice forces  where relevant.

Some of the most commonly used bollard designs today are the T-Head, T-Horn, Kidney, Cleat, Double Bitt, Single Bitt and Pillar.

“Tee Bollard”, “T-bollard”, T- head bollard design has a top shaped like a “T”. Very prominent in many regions of the world due to its simplicity and it gets the job done well up to 300 tonnes. T-head bollards can handle higher line load angels than single bitt and kidney shaped bollards.

Horn Bollards other refer it to as the “Staghorn design” as well can accommodate very steep mooring angles.

Kidney-shaped Bollard has a simple design that is suitable for low to medium tidal range. Kidney shaped bollards offer an economical solution for installations where securing of mooring lines at high angles is not a concern. Not recommended when multiple mooring lines will share one bollard due to the shallow lip at the top of the bollard.

Cleats Bollards are simple type of bollards used for smaller vessels. With a mooring line capacity range from 5 tonnes to 35 tonnes, Cleat Bollards suit marine mooring applications for light commercial use or recreational marina use as well as mounting on vessels.

Double Bitt Bollard, some call it the “Twin Horn” or “Twin” is space-saving for small areas. Double Bitt bollards are useful when high densities of mooring lines are present, this is a better choice for ship mooring and shifting.

Single Bitt Bollard also known as “US Style Pillar Bollards” are particularly suitable for applications where tidal range variations are large and can handle steep mooring line angles.
They are capable of accepting multiple mooring lines and have been designed to fit onto existing bolt patterns for older US style pillar bollards.

Pillar Bollards are normally applicable where tidal ranges are small and use for warping operations along berths where vessels need to be re-positioned for loading purposes.
Due to their 360 degree line of load range, they can also be placed on jetties where vessels berth on both sides of the jetty structure. Pillar Bollards can withstand use in harsh
environments.

Mooring loads should be calculated where possible, but in the absence of information then the following table can be used as an approximate guideline.

Where strong winds, currents or other adverse loads are expected, bollard capacity should be increased by 25% or more.